I'm not going to add difficulty levels and time expectations for this one because it will differ SO much depending on what type of furniture you're transforming!

I've been wanting to get a play kitchen for Leo for awhile. She really loves to open and close cabinet doors so I thought this might be a nice distraction. The only problem was that play kitchens are insanely expensive! I had no desire to spend hundreds of dollars on something she will probably destroy in a year or two. I've seen a lot of people upcycle old pieces of furniture so I thought it was worth a try!

This old cabinet thing used to hang in our laundry room before our laundry room makeover. And I had this old set of drawers that were in pretty bad shape. The previous owners of the house left them and they've been sitting unused in the garage for the last year! I thought these would make the perfect countertop and fridge! 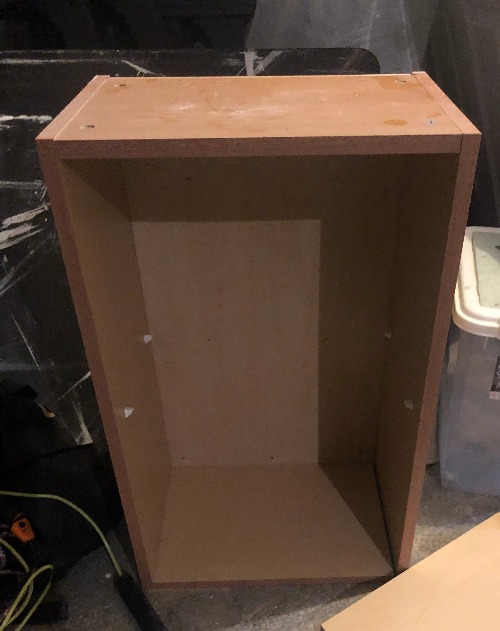 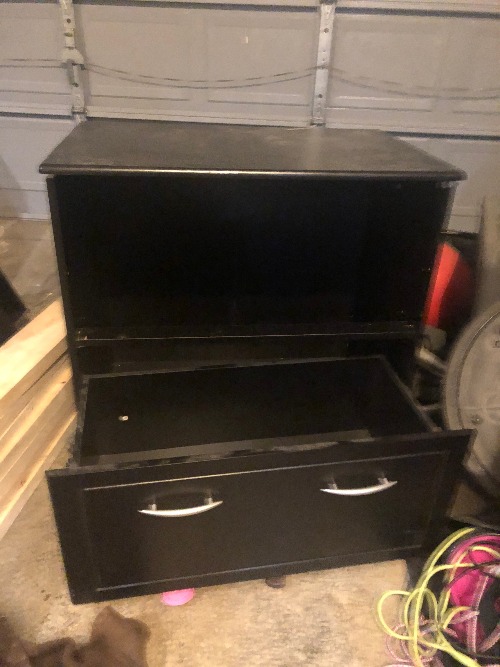 A few disclaimers before we get started.

The first thing I did was get the pieces ready to work on, which included patching up some of the old holes, removing the top of the drawers, the hardware, and taking the drawer apart so I would just have the drawer face.

The next step was to put in some bracing for the piece of plywood I was going to use for the countertop. I had some leftover long, thin pieces of wood (probably a quarter or half inch thick?) from another project so I just screwed those into the back and sides of the dresser-thing.

Next up: priming! This was a super important step because these were both laminate pieces (not real wood). Laminate is notoriously hard to paint so sanding and priming was a must.

Then we moved onto painting! I wanted a retro-type red kitchen, so I did red for the fridge and then a two-tone red/white for the stove/counter piece. I probably ended up doing 4-5 coats of paint on these. I'm not sure if I chose a bad brush or if I'm just bad at painting haha But eventually we covered up all the naked spots and brush strokes!

The countertop was up next. I really wanted to do a stove and a sink. I had a piece of plywood in the garage that I cut down to fit. The tricky part was figuring out the sink. I really wanted it to be inset (not just sitting on top). I looked through the cabinets and found an old red metal bowl that I never use, so I decided that would work perfectly!

I used the bowl to trace a circle where I wanted the sink to be and then used my jigsaw to cut a circle that was slightly smaller so the bowl would fit in but not fall through.

The next step was attaching the doors and OH MY GOODNESS it was awful. I don't have any pictures of it because I was so angry and it took so long. Doors should be easy, right? You cut some wood the size you want and screw the hinges in. FALSE. I could not get the hinges to work right. I ended up buying like, 5 different types to try. The doors still don't close super well, to be honest. If anyone knows how hinges work and they want to explain it to me I'd be forever grateful because they're still a mystery to me. I even tried to watch videos but there are no basic hinge explanations that I could find so I mostly did a lot of trial and error.

This is the only picture I do have, which shows you the amount of holes I drilled trying to make these stupid hinges work.

I attached the doors so one would be like a cabinet and the other would be sort of like an oven door. For the oven door I used a piano hinge! That one was actually surprisingly easy and self-explanatory. I also added some magnetic door closures to keep the doors shut since I did such a terrible job making the doors work correctly.

I saved some of the drawer pulls from the original dresser and used those for all the cabinet handles.

Now came the super fun part! All the fun extras and accessories. I added some bead moulding to the sides and a different type of moulding to the top since it was such a rough edge. I also added a small frame around the chalkboard on the fridge. I attached all these with Liquid Nails.

I wanted a subway tile-esque backsplash and I found this super cute white tile stick and peel wallpaper for $9 on Amazon. Full disclosure: I would not buy this again. It's SUPER thin. You can see right through it (thankfully there's just white behind it here so it wasn't a huge deal for this project). For $9 though, it works pretty well!

I found some small wood circles from Michaels and painted those black for the stove top. I also found some replacement oven knobs on Amazon for $8. I glued all those on with Gorilla Super Glue Gel. If you've never used this stuff, I am telling you, it is AMAZING! It is ridiculously strong and dries really fast.

The last big thing was the faucet. I had SUCH a hard time finding a cheap faucet! They're so expensive. Who knew?! Apparently because of some potential lead issues they can't even sell them used or secondhand anymore, so I had to buy a new one. Thankfully I found a cheap-ish bathroom faucet on Amazon for $14. It was the cheapest I could find so I went with it.

To attach the faucet I ended up using a silicone sealant. I tried liquid nails but it didn't seem to hold super well, but the silicone is holding strong so far!

The last thing I added was a small peel and stick mirror I found at Wal-Mart for $5. Leo LOVES to look in the mirror so I thought it would be a fun addition behind the sink!

I also added some little letters to the fridge that I had sitting around so it says LEO.

One last thing I did was add some caulking around the sink, faucet, and the edges of the countertop to fill in some holes and empty space.

And that was it!! Here's the final product!

It was a huge project, but SO fun. It was really fun to do a project with no plans. I really got a chance to be creative, problem-solve, and figure out how to make this work. It was frustrating at points but super fulfilling when it was all finished!

Plus Leo loves it, so that makes it all worth it. Her new favorite thing is to pretend to wash her hands while making faces in the mirror.

This project's imperfections: The biggest one really is the doors. The doors are crazy uneven, don't shut super well, and are just pretty poorly made all around haha But they work well enough and I figure Leo will break them pretty soon anyway so oh well! I also made the fridge door too long and it wouldn't open, so I had to add some wood under the fridge so the door wouldn't hit the floor. The tile wallpaper doesn't line up well. I got a lot of caulk on the sink part so that looks pretty messy. It's definitely not the most well-constructed thing I've made but it has been the most fun!